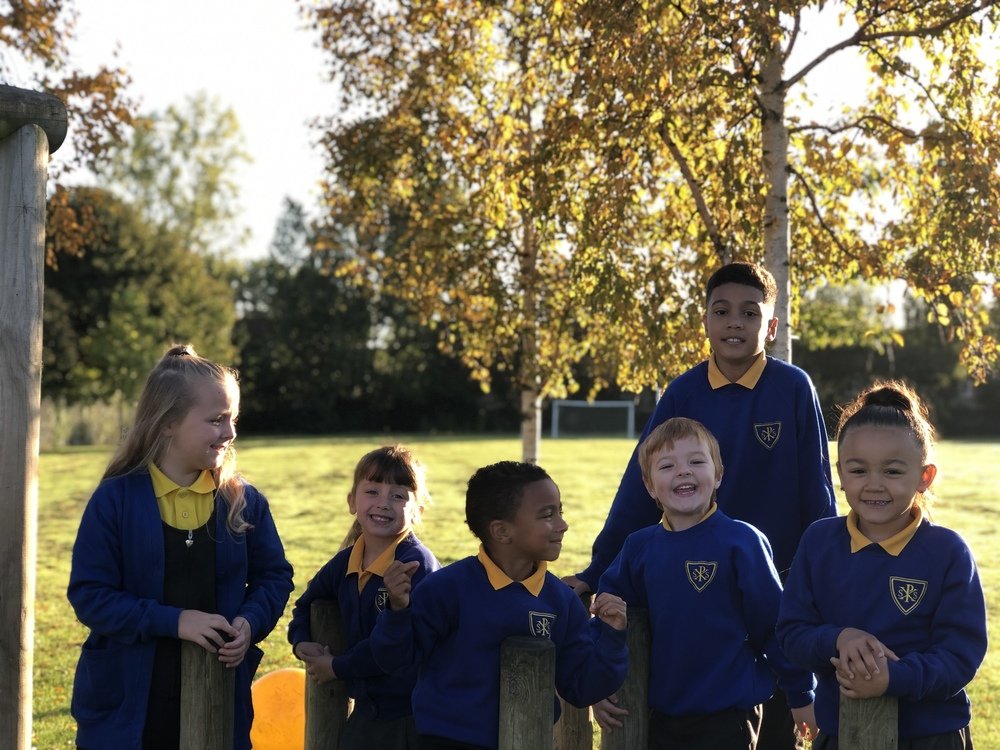 wE ARE TAUGHT BY:

OUR TEACHING ASSISTANT IS:

To download this, or copies of Topic Overviews from previous terms, please scroll down to the bottom of the page.

history - the great fire of london

We opened a reveal box containing clues on our new topic. We tried to be detectives and use all our clues to see if we could figure it out. We had diary entries on old paper, cheese, bread, wine bottle, candlestick, burn wood, gold coins, a map of London and a inkwell and quill.
Melodie said ‘it must be some sort of fire that happened in 1666’. Amelia added after opening the map ‘the fire must have been in London’. Jack knew it was a map of London because he has been there before!

We got into groups and acted out different aspects of the fire while the rest of the class had to guess what we were.
We were the wind, waving our arms about and twirling.
We were people carrying heavy buckets of water from the River Thames to our houses to put out the fire.
We were different people, packing away our possessions and burying them somewhere safe and packing up food for people in tents outside of London.

We have been busy learning all about Geography this term, learning the names and locations of the 7 continents, the 5 oceans and rivers of the world.
We have been learning songs to help us remember! Ask us to sing it for you so you can learn the continents and oceans of the world too!

We received a letter from the Penguins in Antarctica asking if we had seen their missing penguin. So, we promptly made posters and plastered them all over the school asking if anybody had seen him. We then went on a penguin hunt, looking for clues of his whereabouts. Thankfully after excellent clue-spotting we found him huddled up in a nest in the tyres on our playground! We are keeping him nice and safe in Giraffes class until he is ready to return to his family in Antarctica.

ExplorerDome came to visit us for an exciting Environment workshop!  We had to take off our shoes, crawl along a long tunnel until we were inside the dome. We learnt all about the rain forests, deserts and oceans of the world. We felt rain on us, smelt the rubbish in the rubbish dump (yuck!) and pretended we were polar bears in Antarctica.

We celebrated Anti-Bullying week by wearing Odd Socks! Thank you to all who students who wore odd socks. We spoke a lot about being the change and how we can make a difference to ensure we put an end to bullying!
We have kind hands, kind feet and use kind words in Giraffes class.

enquiry topic - who is florence nightingale

Giraffes have been learning all about Florence Nightingale.

On Friday 13th September we had our first 'Hook Day'. We set the classroom up to make our very own hospital with beds and a waiting room. The children all learnt about the famous nurse Florence Nightingale. We then made our own nurse hats and badges and got to work helping all the unwell people. The children had a fantastic day bandaging their friends (and teddies) up, giving them medicine (sweets!) and playing hospitals.

Later in the day we made lamps just like the one Florence Nightingale or 'The lady with the lamp' may have had by staining paper in cold tea and folding the paper once dry. We then wrapped gold and silver paper around the top and bottom, attached a handle and we were all ready to work through the night! 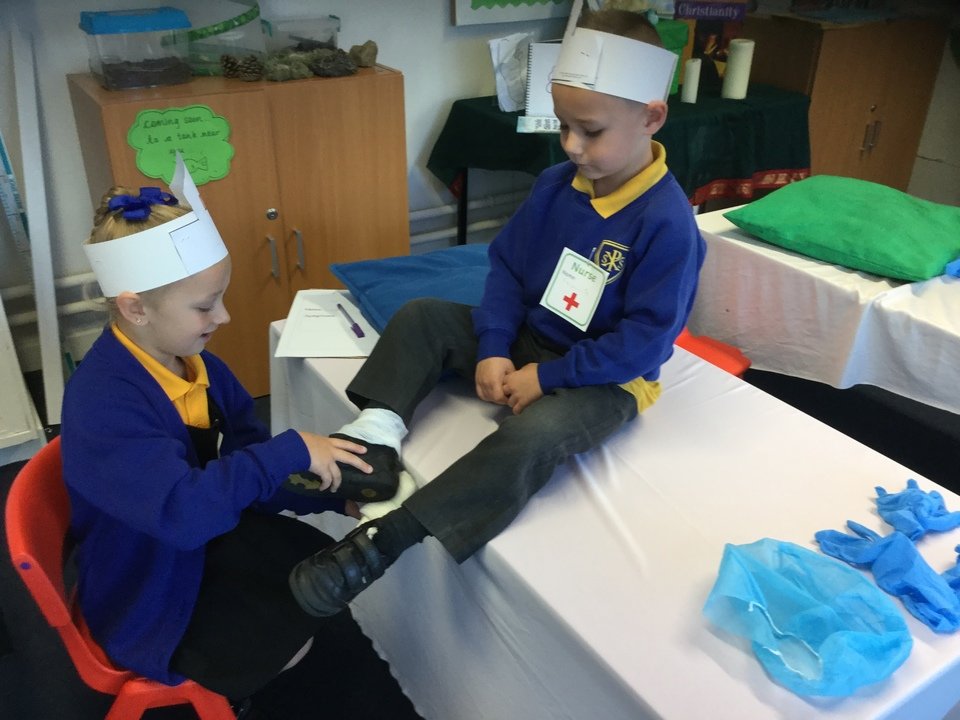 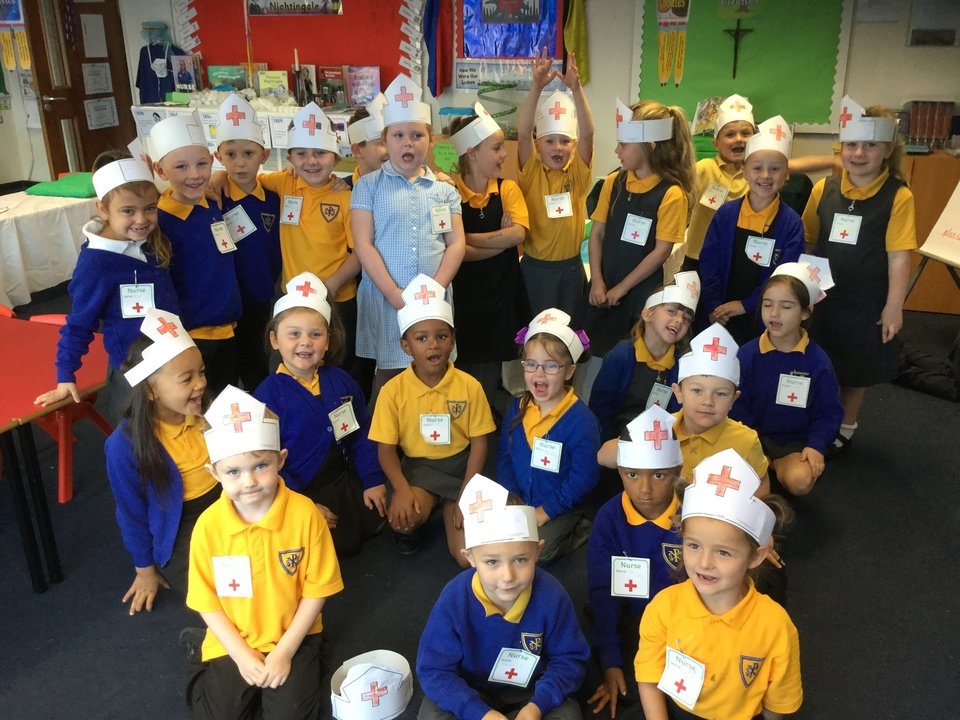 We celebrated Harvest on Friday 4th October in our whole school assembly. We all learnt a song 'Little Combined Harvester' and performed it in front of the school and our families! 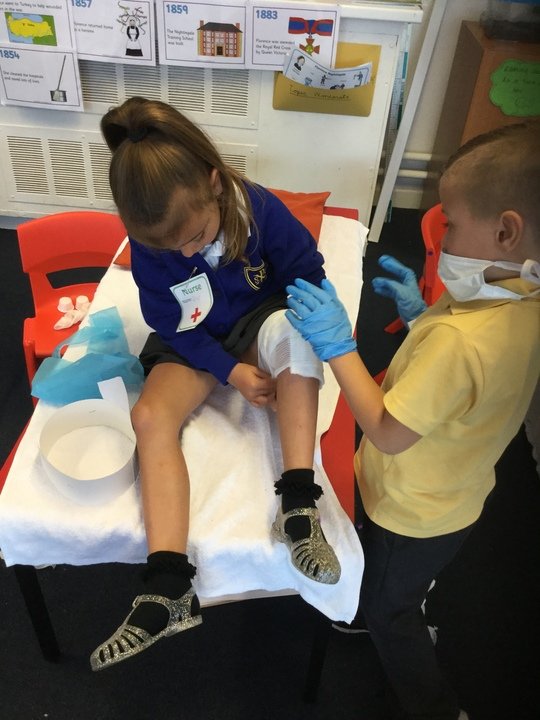 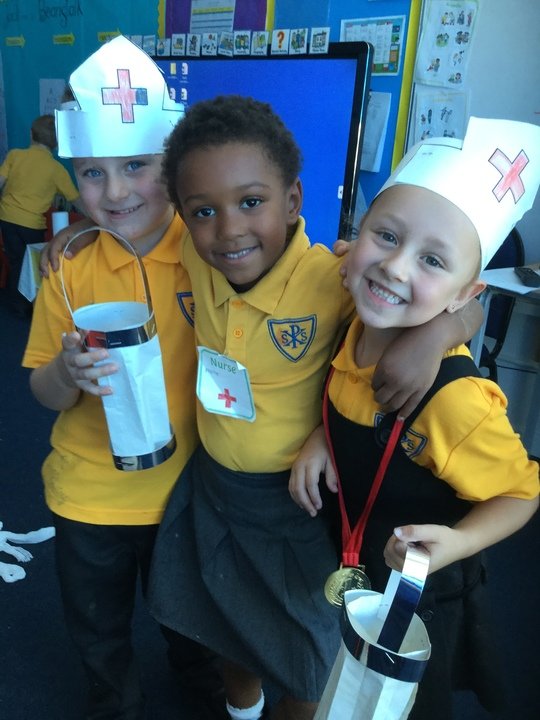